Close-quarters combat (CQC) is a tactical concept that involves a physical confrontation between several combatants. It can take place between military units, police/corrections officers and criminals, and in other similar scenarios. In warfare, it usually consists of small units or teams engaging the enemy with personal weapons at very short range, up to 100 meters (109.4 yards), from proximity hand-to-hand combat to close-quarter target negotiation with short-range firearms. In the typical close-quarters–combat scenario, the attackers try a very fast, violent takeover of a vehicle or structure controlled by the defenders, who usually have no easy way to withdraw. Because enemies, hostages/civilians, and fellow operators can be closely intermingled, close-quarters combat demands a rapid assault and a precise application of lethal force. The operators need great proficiency with their weapons, and the ability to make split-second decisions in order to minimize accidental casualties.

Criminals sometimes use close-quarters–combat techniques, such as in an armed robbery or jailbreak, but most of the terminology comes from training used to prepare soldiers, police/corrections officers, and other authorities. Therefore, much material relating to close-quarters combat is written from the perspective of the authorities who must break into the stronghold where the opposing force has barricaded itself. Typical examples would be commando operations behind enemy lines and hostage rescues.

The origins of modern close-quarters combat as well as SWAT tactics lie in the policing methods pioneered by Assistant Commissioner William E. Fairbairn in the Shanghai Municipal Police of the International Settlement (1854–1943). After the May Thirtieth Movement riots, Fairbairn was charged with developing an auxiliary squad for riot control and aggressive policing. After absorbing the most appropriate elements from a variety of martial-arts experts, from China, Japan and elsewhere, he condensed these arts into a practical combat system he called Defendu.

The aim of his combat system was simply to be as brutally effective as possible. It was also a system, that, unlike traditional oriental martial arts that required years of intensive training, could be digested by recruits relatively quickly. The method incorporated training in point shooting and gun-combat techniques, as well as the effective use of more ad hoc weapons such as chairs or table legs.

During the Second World War, Fairbairn was brought back to Britain, and, after demonstrating the effectiveness of his techniques, was recruited to train the British commandos in his combat method. During this period, he expanded his 'Shanghai Method' into the 'Silent Killing Close Quarters Combat method' for military application. This became standard combat training for all British special operations personnel. He also designed the pioneering Fairbairn-Sykes fighting knife, which was adopted for use by British and American Special Forces. In 1942, he published a textbook for close-quarters combat training called Get Tough.

U.S. Army officers Rex Applegate and Anthony Biddle were taught Fairbairn's methods at a training facility in Scotland, and adopted the program for the training of OSS operatives at a newly opened camp near Lake Ontario in Canada. Applegate published his work in 1943, called Kill or Get Killed. During the war, training was provided to British commandos, the Devil's Brigade, OSS, U.S. Army Rangers and Marine Raiders.

Other combat systems designed for military combat were introduced elsewhere, including European Unifight, Chinese Sanshou, Soviet/Russian sambo, and the Israeli Kapap and Krav Maga. The prevalence and style of hand-to-hand combat training often changes based on perceived need. Elite units such as special forces and commando units tend to place a higher emphasis on hand-to-hand–combat training. 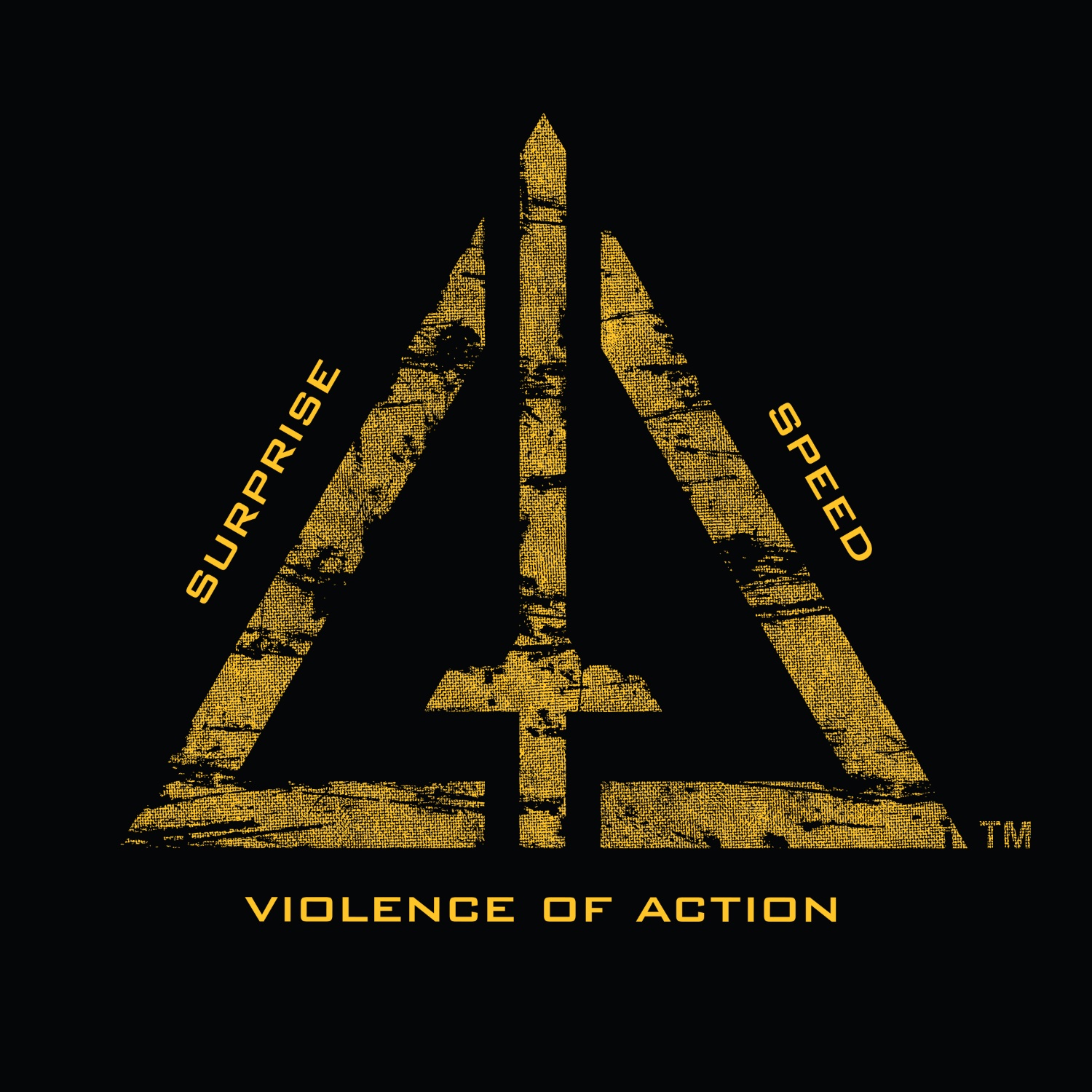 Ideally, the leader of the assault team gathers all available intelligence about the crisis scene, targets, and innocents. The leader diagrams and discusses the proposed plan, outlining each team's actions and responsibilities, location, fields of fire, and special tasks (even to the point of a wall-by-wall and door-by-door layout of the objective, where available). Since the assault team usually already has specialized training, the operation is based on well-understood, pre-established standing operating procedure. When considerable preparation time is available, the team sometimes conducts step-by-step walk-through exercises on a mock-up that duplicates the target environment. Some units maintain permanent "shoot houses" or even airliner/ship mock-ups for practising marksmanship and tactics more realistically.

In a prolonged standoff, the attackers can sometimes bring in specialized equipment for probing the inside of a well-defended area. Sensitive thermal cameras can help locate the occupants, and surveillance personnel can run microphones and fiber-optic cameras through walls, ceilings, and floors. If hostages escape or can communicate/signal the attackers, they can provide more information from inside.

However, the time and resources to carry out such luxurious preparations are not always there. Not every attacker can field an overwhelming force of specially trained and equipped men with reinforcements standing by. Information about the inside of an enemy-held building or vehicle may not be accessible beyond studying it through binoculars or a rifle scope. While some attackers can go to the lengths of wearing the enemy down by siege or even tunnelling under them, others must get the current job done immediately with the force available in order to move on to the next.

The objective is to complete all offensive action before the party being engaged is able to react. To gain this element of surprise, the entry teams use stealth movement and noise/light discipline to get as close to the targets as possible. The teams aim to put themselves in a position to be able to engage the targets from the moment they become aware of the teams. Some teams use suppressed sniper rifles for their initial shots on sentries or dogs.

An assault should come at a time when least expected, taking into consideration fatigue, normal sleep periods, and other factors that detract from the target's alertness. Diversions are an essential element in achieving surprise. Staged emergencies, such as a mock auto accident, fire, or explosion near the crisis site, can divert the target's attention away from the assaulting elements. Explosive breaching and diversionary devices, such as flashbang, smoke, or gas grenades can be employed to distract and disorient the targets. Negotiators can try to manipulate the defenders into a more vulnerable position or convince them that their position will not be stormed.

When law enforcement agents clear a building, they usually work slowly and deliberately, using ballistic shields and mirrors for searching. This affords the highest degree of safety and security for the police, as well as for any uninvolved bystanders inside the search area, who can be identified and safely removed without subjecting them to the shock and danger of a sudden assault. When suspects are encountered, the police can confront them with an alert, armed force and try to take control without shooting. If the searchers meet heavy resistance, they can usually pull back without harm and prepare for a dynamic entry.

However, against determined, well-armed opponents who fight in concert to defend an area and keep it under their control, slow stop-and-go movement can cause the deaths of many attackers and hostages. That leads to dynamic entry used in military operations or hostage rescues. It is the popular image of CQC: a flood of gunmen who burst in without warning and attempt to seize the area. Dynamic entry tactics must be rapid and aggressive, ideally a continuous flow using overwhelming force that does not stop until the threat is eliminated.

In the vast majority of hostage rescue and other dynamic CQC operations, it is desirable to use multiple simultaneous attacks from different entry points to overload the target's ability to react effectively. The more entry points the attackers can choose from, the better their chances. The teams entering the objective usually have to synchronize with snipers, negotiators, power technicians, perimeter guards, and others who assist from the outside. Medical personnel, investigators, and bomb experts may be prepped to enter the scene as soon as the initial attackers get control.

It is important that a central commander coordinate all armed elements, not only to better complete a sweep of the target area, but especially to guard against friendly fire. When large areas must be searched, leaders will assign boundaries between elements and may track them by radio to ensure they do not interfere with each other. The goal is to establish overlapping fields of fire, so that multiple shooters can attack at once from different directions without danger of hitting one another.

It is possible that a point of entry can be created by a precision explosive device to catch the adversary by surprise.

Bruneian soldiers and US Marines practice clearing a room during CARAT 2011 exercises in Brunei.

Once the assault begins, the team must gain control before the target understands what is happening and can prepare an effective defense or mount a counterattack. The defenders sometimes have a contingency plan that could cause the attack to fail instantly, such as killing hostages, detonating bombs, or destroying evidence. If they can execute an organized plan, such as falling back into a prepared stronghold, or breaking through the perimeter, the possibility of friendly casualties increases. Speed is achieved through well-designed tactics, such as gaining proximity with an undetected approach, the use of multiple entry points, and explosive breaching. Note that the need for speed does not necessarily translate to individual operators choosing to run in these situations.

Operators of Hungarian Army's KMZ enters a room while attacking the unit's killing house. Note that the first attackers have taken the room's two corners closest to the entry point at first, while the second group continues the attack towards the next room.

For the dynamic entry team, gaining and maintaining physical and psychological momentum is essential. The team may breach doors, blast holes in walls, enter through windows, or rappel or fast-rope from helicopters. Vehicle-mounted rams and platforms may be used to create unexpected entry points. The sensory onslaught from tear gas, explosive breaching, flashbangs, and gunfire is complemented by the intimidating and aggressive actions of the assault team. Hostiles do sometimes hide among the hostages, so once the shooting has stopped, operators must maintain dominance over anyone still alive.

The defenders often try to stop enemies close to the entry points. The "fatal funnel" is the cone-shaped path leading from the entry where the assaulter is most vulnerable to defenders inside the room. Once operators begin to enter, the defenders may try to keep them from escaping the fatal funnel. The attackers are also vulnerable from the corners closest to the entry point, the first place from which they can be hit from behind as they enter the room. If the first attackers cannot clear the corners and get out of the fatal funnel, allowing those behind to move in and help, the attack can bog down.

Armies that often engage in urban warfare operation may train most of their infantry in basic CQC doctrine as it relates to common tasks such as building entry, clearing a room, and using concussion and other grenades.